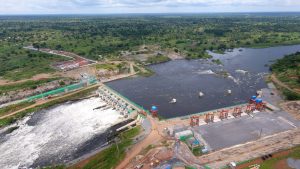 The commissioning of the 600-megawatt hydropower station by the end of 2022 is in doubt as several related programs are far from being concluded.

These include substations in different parts of the country as well as transmission lines that are supposed to evacuate the electricity from Karuma to these stations. The dilemma, however, is that should the power station be complete and commissioned before the transmission infrastructure, power produced and not used, also known as deemed energy, will have to be paid for by the government.

The dam, which will be Uganda’s biggest so far, will be three-and-a-half years later than the original date set for its completion. The delay to complete construction was mainly due to unfinished works such as spillway rehabilitation and other minor defects.

According to the Auditor General’s report for the financial year ended June 2021, the country paid for energy produced by independent power producers, worth 87.7 billion shillings. This was in regard to thirteen Power Purchase Agreements, which were financed through the electricity tariff system, hence negatively impacting the electricity price to the final consumer. Only one Hydro Power Plant did not fall in this category.

According to several Power Purchase Agreements and other implementation agreements between the power producers, the government and the Uganda Electricity Transmission Co Ltd, the government committed to construct power evacuation infrastructure from the generation facilities to the distribution network upon commencement of generation and dispatch of power by IPPs.

“I noted that UETCL continues to pay significant amounts relating to deemed energy purchases. These are significant losses for which the Company did not generate economic value. Payment of this amount would significantly affect the company’s cash flows,” says the Auditor General.

Recently, the Minister for energy and mineral development, Ruth Nankabirwa said the government had completed the construction of the 248km 400Kv Karuma-Kawanda high voltage line, as well as the 54km 132Kv line from Karuma to Olwiyo in Nwoya and to Lira.

“I noted that the completion of land acquisition process or the Resettlement Action Plan (RAP) for the 132kV Karuma-Lira Transmission Line and Karuma Dam Reservoir by UTECL and MEMD, respectively, remain outstanding,” says the Auditor General. These when not completed will affect the commissioning of the Karuma Dam, which is also a breach of the employer’s obligations under the Engineering, Procurement and Construction Contract with significant risk to the overall project completion.

“I advised the Accounting Officer to continue engaging the Regulator and other sector players to address the infrastructural constraints in the transmission network to ensure efficient evacuation of generated power.” By December, construction works for the three substations was at 98%, 90% and 95% respectively.

She said apart from programs to help increase domestic consumption, there are plans to directly transmit electricity to industrial parks, with the Kapeeka project complete.

“To facilitate the supply of power to industrial parks, construction of the Kawanda-Kapeeka power line and Kapeeka Substation have been completed to supply power to Kapeeka Industrial Park,” says Nankabirwa.

According to the Ministry, by the end of the year, Uganda will have a production capacity of 2000 megawatts from the current 1,250, however, the amount of unused power will most likely increase due to less demand.

But apart from the deemed energy, another 15.3 billion shillings was lost in the evacuation process, according to the AG’s report. “The amount is due to power evacuation losses stemming from the absence of transmission lines to evacuate electricity from PA Technical, Siti 1 and Arpe Power Plants which resulted in wheeling power over a lower capacity and weaker distribution lines operated by UEDCL.”

The delays are also likely to result in increased supervision costs and increased commitment fees payable on undrawn balances of the loan, of which the government had already paid commitment fees amounting to 2.9 billion shillings as of June 30, 2021.

It also reduces the period between commissioning, commercialization and payback which may influence the electricity tariff structure.

“I advised the Accounting Officer to ensure that the rectification of pending works under the Karuma Dam is expedited to enable project completion and commissioning without further delay,” the Auditor General concludes.