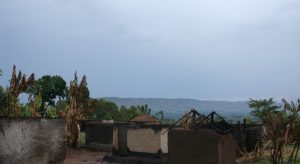 Over 200 families in Rwengabi village, Kaseeta Parish, Kabwoya Sub county, in Hoima district are experiencing sleepless nights following eviction threats from their ancestral land.
The land in question measuring 470 acres is a few kilometres away from Kabaale International airport construction site.
The residents are accusing one Allan, a son to a Hoima based businessman of sending them eviction threats alleging that he owns the land.
The affected residents explain that Allan has never bought any piece of land in the area but he rather wants to take over his grandfather’s land one Zakayo. The residents allege that Allan’s grandfather over 18 years ago bought some land measuring 25 acres in the village but instead wants to use this opportunity to grab the land measuring over 470 acres belonging to the locals.

Mustapha Kyahurwenda, a resident questions how Allan who approached them as a good neighbour who was using his grandfather’s land has instead turned against them by grabbing their entire land.

John Okello a resident on this land says that people are in deep fear because of the constant threats and eviction attempts centered on them by Allan hence appealing to the district leadership to curb down the pending saga by engaging with the concerned parties to help them before their displacement.

The threats according to the affected persons bring fresh memories of the December 3, 2014 attacks in the same area. More than 100 people were left homeless on December 3, when a group of Bunyoro Kitara Kingdom officials and some kingdom subjects invaded Rwengabi village in Kaseta parish Kabwoya Sub county, Hoima district.
The attacks came ahead of Omukama Solomon Gafabusa Iguru’s visit to the land, formerly his hunting ground. More than 70 huts were burnt, an unspecified number of animals killed and 112 residents displaced. Also burnt were structures of Rwengabi Community School.

Sylvia Nanuka, a resident of Rwengabi wonders why Allan during the 2014 attacks did not come out to claim ownership of the land but has rather come out at a time when construction of the airport which is adjust to the disputed land is nearing completion.

The residents are also accusing the security operatives in Kikuube district of aiding Allan with his eviction plans.
But when contacted, the Kikuube RDC Amlan Tumusiime says he was not aware of eviction threats and the harassment of residnets and has promised to investigate the claims.