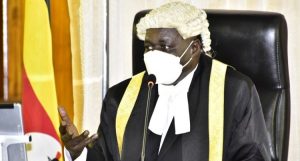 The Speaker of Parliament Jacob Oulanyah is dead.

His death was announced by President Yoweri Museveni on Sunday at 1:07 pm through his official Twitter account.

“Countrymen and Countrywomen. It is with a lot of sadness that I announce the death of the Rt. Hon. Jacob Oulanyah, the Speaker of Parliament “, the President’s Tweet read.

Oulanyah, 56, was referred abroad on February 3rd for specialized healthcare by Doctors at Mulago National Referral Hospital where he was first admitted in January.

On Monday, the Democratic Party President Norbert Mao, alongside Chief Justice Alfonse Owiny-Dollo, Deputy Speaker Anita Among, Dr Jane Ruth Aceng the Minister of Health and Oulanyah’s brother, Francis Emuna hastily flew to Seattle in United States of America to check on him where he was indisposed since February 4th, 2021.

Both Mao and the Deputy Speaker, through their Twitter accounts dismissed claims that Oulanyah had died.

Oulanyah, an agricultural economist, and lawyer, served as Deputy Speaker of the 2006 – 2016 under Rebecca Kadaga before defeating her on 24 May 2021 to become Speaker of the 11th Parliament.

He only served for 9 months and 24 days.