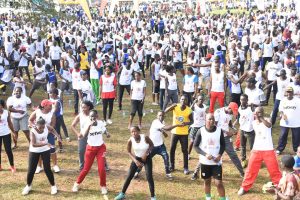 Thousands of Bunyoro Kingdom subjects will tomorrow Thursday June 9, 2022 take part in the Empango run which is one of the activities organised to mark the 28th Coronation Anniversary for the King of Bunyoro Kitara Kingdom Dr. Solomon Iguru Gafabusa.

The run will kick off at exactly 7am at the Kingdom Chambers.