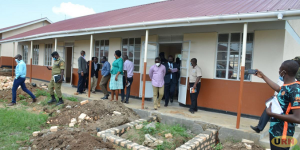 The Kikuube District Chief Administrative officer Andrew Milton Chelangat Kamalingin has clarified that the use of structures at Nyairongo Seed Secondary School in Kabwoya before their completion was as a result of a petition by parents.

This issue has raised dust among the leaders demanding to know why the school structures are being used before commissioning.

Now, Kamalingin confirms that the district officials paid the contractor before the completion of the project adding that investigation are ongoing to ascertain the reason why the payment was made.

However, he explains that the district took the decision to use the school structures before completion after parents petitioned his office demanding to be allowed to use the structures since students hand nowhere to study from.

Kamalingin says after the petition by the parents, the district executive committee and education department discussed and agreed to allow the structures to be used as they look for the contractors to complete the works.