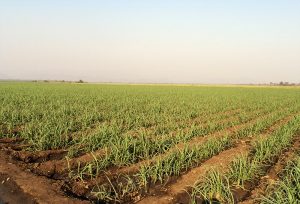 Out grower sugarcane farmers in Bunyoro region are facing financial ruin due to delayed buying of sugarcane and under payment by Kinyara Sugar Works Limited, the biggest sugar producing company in the region.

The desperate farmers now see only two likely destinations – prison or slavery. They say failure to service their bank loans will end in jail for them or they will spend the rest of their lives working for Kinyara Sugar Works Limited which is also their creditor.

The farmers’ grievances that have taken years to be solved have led to the intervention of the State Minister for Trade and Industry David Bahati.

The farmers accused the company of delaying to harvest their sugarcane, which results in the drying and the burning of sugarcane farms.

Speaking during the meeting that was held at Kinyara Sugar Factory on Thursday, Pius Wakabi Bugahya County MP in Hoima district and also sugarcane out grower complained of little pay for the sugarcane.

He explains that one ton of sugarcane is bought at Sh88,000 without the charges of transport and the payment of harvesters adding that farmers remain with Sh50,000 after deducting all these charges.

He argued that such frustration is forcing farmers to abandon growing sugarcane and demanded that the government intervenes.

Minister Bahati expressed concern about the frustration by farmers and promised to forward all the issues raised by the farmers to cabinet and the ministries of finance and trade for redress.

However, he asked the company to address the issues which are in their mandate such as delayed payment of farmers and harvesting of the cane.