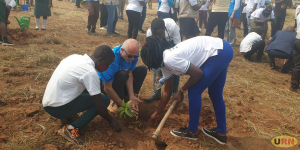 The State Minister fir Disaster Preparedness and Refugees, Esther Anyakuni has revealed a plan by the government to plant trees in the refugee host districts to restore the environment and forest cover.

The Minister said this on Monday where she was the Chief Guest at the commemoration of the World Refugee day at Rubondo zone play ground in Nakivale Refugee settlement.

The Minister said that the government has committed to ensuring that massive tree planting in refugee-hosting areas is conducted and called for support from UNHCR, host districts, and the private sector among others to ensure a green cover is restored.

She said that several activities against the forest cover are being done and the country has lost its forest cover to about 12.4 per cent down from 24 per cent in the 1990s noting that they are targeting to plant 14,000 trees daily across all the settlements.

She launched the campaign to begin planting trees and said that the environment especially forests and wetlands have been encroached on by refugees in the hosting districts noting that government is hopeful the plan will be a success through its water and environment Refugee Response Plan.

Justine Ggoza, the Assistant Commandant Rubondo Zone in Nakivale refugee settlement said that this year’s theme “The right to seek safety, protect and conserve the Environment” will see them plant trees on all hills in the settlement, all institutions, like schools and health centres, along roadsides. She also made it clear that they will consider leaving places for the cattle farmers to graze.

Joel Boutre, the Country representative UNHCR is concerned that the increasing influx of refugees into Uganda has imparted pressure on the already over stretched social- economic services in the settlements.

Aaron Turahi, the Isingiro District Chairperson LC V welcomed the campaign to plant trees but wants the lead stakeholders and refugees’ leaders to consult the community leaders and harmonize on where to plant the trees to avoid conflicts.

James Nsabimana, a refugee at Kibaare C Village said that the area being a dry cattle corridor is becoming hotter daily and the water wells are drying up noting that the planting of trees will have an impact on the changing environment.

Uganda is host to over 1.5 million refugees and asylum seekers hosted in settlements across 13 districts. However, fighting continuing along the Eastern Border of the Democratic Republic of Congo has forced more Congolese to seek shelter in Uganda.

Statistics show that Uganda has received 62,000, refugees, since January from both DRC and South Sudan.