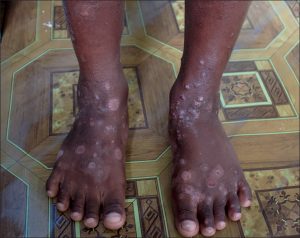 More than 1,000 people in sixteen villages in Hoima district are battling a fresh scabies outbreak. The disease, which manifests with severe and relentless itching has affected among others Nyakabingo, Bineneza, Kalyango, Kigawa, Bugandale, Kibugubya, Kyarubanga, and Katugo villages in Kyabigambire sub-county.

Scabies is an itchy, highly contagious skin disease that spreads through skin-to-skin contact.

Johnson Andama, a resident of Bineneza village, says that three of his children have seriously been affected by the outbreak of scabies. He has called upon health officials in the district to respond to the crisis expeditiously.

Vincent Othuba, a resident of Bugandale village, says that the situation is almost getting out of hand, adding that the disease could spread to more villages left unattended.
Alex Mwesigwa, the Kyabigambire sub-county LC 3 Chairperson, says that he has notified the district health department of possible intervention.

Roland Musiime, the health Assistant in charge of Kyabigambire sub-county, says that they have embarked on a massive health sensitization awareness campaign among the locals to contain the further spread of the disease.

Dr. Lawrence Tumusiime, the Hoima District Health Officer-DHO has called on the scabies victims to maintain good personnel hygiene, adding that the health department will soon dispatch a team to start treating the affected residents.