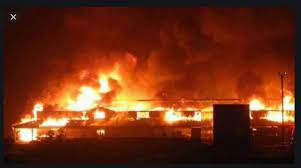 Police are holding a senior four students of Public SS Mabaale in Mabaale town council Kagadi district on suspicion of torching a dormitory at his school. The boy’s dormitory went up in flames around 8 pm Tuesday last week as students were attending preps.

The fire reduced student property including mattresses, books, jerry cans, clothes, and money among others to ashes. Now, the Kagadi District Police Commander, Moses Muzima Kiconco, says that they picked up a student suspected to have started the fire from his hideout in Kyakabadiima sub-county over the weekend.

Muzima says that the suspect has since confessed that he used petrol worth Shillings 3000 to burn the school after being punished for stealing a mobile phone from his colleague. He said the suspect will be taken to court to answer charges of arson.

The suspect is locked up at Kagadi central police station. The School Director, Yonna Bagonza, says that the most affected are S.4 candidates who were preparing for their end-of-term exams. Some students who spoke to our reporter on condition of anonymity said this situation puts them in a very hard condition given the fact that their parents are just recovering from the COVID-19 effects.

According to Bagonza, the school of Board of Governors had resolved to support the 122 students who lost their property in the fire till they complete this term. He says that they have launched a drive to solicit financial assistance to mitigate the current situation, saying that management cannot manage to rebuild the boy’s dormitory as well as support students, given the COVID-19 situation that affected them.

Situated in Kyetera ‘‘B’’ Cell, Kyetera Ward, Mabaale Town Council, Public Secondary School Mabaale is a private community day and boarding O-level Secondary school. It was started about 22 years ago.