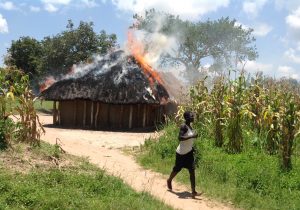 Unknown assailants have torched a grass-thatched hut in Hoima district killing two children. The incident happened around 2am in Aliwara village in Marongo parish in Bombo sub-county on Tuesday morning.

The deceased minors have been identified as Ofoi Mungu,8, and Mercy 5, both children of Godfrey Utungi and Grace Anirwoth of the same area. The minor’s mother was away in the trading center when the assailants torched the house.

Charles Oting, a neighbor told Uganda Radio Network that they realized the house was on fire at around 2a.m and rushed to rescue the children but it was too late to save their lives.

Jedhone Okello, another resident explains that they attempted to rescue the children but unfortunately the door was under key and lock, which frustrated their efforts to rescue and save the lives of the children.

Felix Letha, another resident says it is unfortunate that the children’s mother locked them inside the house and went to drink in the trading center.

Emmanuel Adriko, the Bombo Sub-county LC3 Chairperson, says that they immediately alerted the police who rushed to the area and picked up the body. He has warned residents to desist from leaving children unattended, especially during the night hours.

Julius Hakiza, the Albertine region police spokesperson, says that investigations into the incident have already commenced.